The Boxster 981, third generation of the roadster, is marketed since April 14, 2012. It is notably lighter, powerful and sober than the old model.Among the novelties on the outside, there are more impressive side air intakes, elongated optics recalling the Carrera GT or shortened overhangs. A telescopic wing is now present at the rear; the latter, when it is retracted, is in the continuity of the turn signals and merges with the brake lights. Inside, the dashboard is inspired by the Panamera and Carrera GT.
The engine is direct fuel injection. The engine capacity decreases from 2.9L to 2.7L for the Boxster (with a gain of 10 hp from 255 to 265 hp), the S version remaining at 3.4L but gaining 5 hp. It accelerates from 0 to 100 km / h in 5.7 s for the single version, 5.0 s for the S version. The Boxster 981 is also more economical thanks to the reduction of its weight (20 kg), as well as 'to the StopStart system in series. It also incorporates an energy recovery system.
BOXSTER et BOXSTER S 981 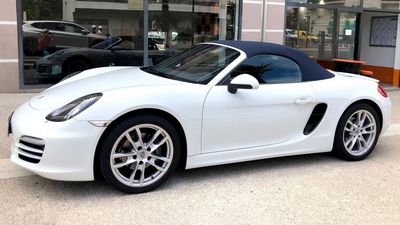